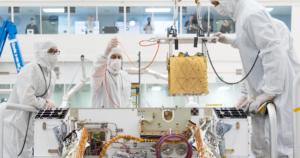 NASA is letting the public into one of its ultra-sterile clean rooms — and it’s not even requiring that you wash your hands first.

On Thursday, the agency began streaming a live video feed from a newly installed webcam in a clean room at its Jet Propulsion Laboratory (JPL). It’s the same room where NASA engineers are currently assembling and testing the Mars 2020 rover — meaning anyone with access to YouTube can now watch as an integral part of the agency’s future off-world plans take shape.

The “Seeing 2020” webcam is live 24 hours a day, barring any maintenance or technical glitches.

However, don’t expect to find a lot going on if you tune in at 3 a.m. on a Saturday — according to a NASA news release, the team typically works Monday through Friday, getting into the room around 11 a.m. EDT.

If you have any questions about what you see while watching the stream, members of JPL’s social media team and the Mars 2020 team are moderating live chats on the YouTube channel every Monday through Thursday at 2 p.m. and 7 p.m. ET.

“There is so much happening and changing in the clean room, I come here every opportunity I get,” Mars 2020 project manager John McNamee said in the news release. “It is great that we can share this part of our journey to the Red Planet with the public anytime they want.”

More on Mars 2020: Here’s How NASA Prepares Its Spacecraft for Mars