Germany Plans to Make Measles Vaccines Mandatory for All Children 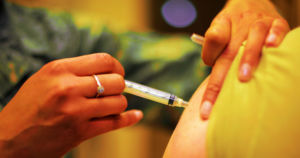 The German government just proposed a plan to make measles vaccinations mandatory for children and people who work at kindergartens and schools. Parents could face fines of up to $2,800 if they don’t get their children vaccinated.

To prove they have been vaccinated, parents will have to hand over their children’s vaccination records.

“Whether in kindergarten, at the childminder or at school — we want to protect all children against measles infection,” Health Minister Jens Spahn said in a statement.

A growing number of EU countries are choosing to make vaccinations mandatory to stop outbreaks of diseases like measles.

According to the World Health Organization, the percentage of children that received doses of the measles vaccine dropped from 97 peorcent to just 93 percent. That’s in part due to fears that vaccines could have negative health effects such as causing autism — a belief that has been debunked time and time again.

More on vaccines: First Human Drug Developed Solely by AI Is a Vaccine

The post Germany Plans to Make Measles Vaccines Mandatory for All Children appeared first on Futurism.