California Is Cutting Power For Nearly a Million Homes 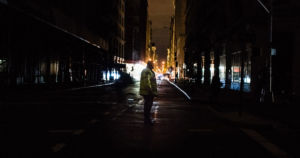 Apparently, the company is concerned that windy conditions could damage its equipment and spark devastating wildfires, CNBC reports — so about 800,000 customers in 34 California counties will need to go without electricity for as long as five days.

California Governor Gavin Newsom protested the company’s preventative blackouts, arguing that the problem could have been avoided if PG&E had maintained its decaying, wind-vulnerable infrastructure over the years.

The company’s decision is reminiscent of when Con Ed turned off the power in low-income areas of New York to prevent a massive city-wide blackout.

“No one is satisfied with this, no one is happy with this,” Newsom said, per CNBC.

Aside from burdening people with the personal costs of food spoilage and other problems, the shutdown could cause serious issues throughout the state as hospitals and other infrastructure facilities find other ways to keep the lights on.

“It’s inexcusable that we’re in the situation that we’re in,” Cloverdale Mayor Melanie Bagby said, according to CNBC. “We pay our bills, and we gave PG&E a monopoly to guarantee we would have” reliable power, she added.

More on energy infrastructure: The Consequences of Underestimating Solar Could Prove Devastating

The post California Is Cutting Power For Nearly a Million Homes appeared first on Futurism.