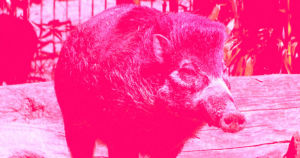 Pigs are one of the smartest animals on Earth, right up there with elephants, crows, and dolphins. But while scientists have caught all three of the latter types of animals using tools — a hallmark of advanced intelligence — they’d never seen pigs exhibit the same behavior.

Until now, that is, as a team of scientists has released the first known video of pigs using tools.

The ecologist behind the video, Meredith Root-Bernstein, told National Geographic she was watching a family of Visayan warty pigs at a zoo in Paris when she noticed one the animals picking up a piece of bark in its mouth and using the wood to dig around in the soil.

“I said, ‘Whoa, that’s pretty cool,’” she recalled to National Geographic. “When I looked up tool use in pigs, there was nothing.”

That visit became the first of many for Root-Bernstein and her colleagues over the next few years. During that time, they saw three pigs using tools to help them build their nests, activity the researchers detailed in a September paper published in the journal Mammalian Biology.

Root-Bernstein’s team may be the first to record tool usage in pigs, but she told National Geographic she suspects that wild pigs may use tools as well — we’ve just never noticed because the animals are rarely studied.

Now that scientists have caught this one species of pig using tools, however, researchers might be more compelled to hunt for similar activity amongst other species of pig. Either way, though, Root-Bernstein seems pleased to have been involved in the discovery that pigs have evolved to use tools — just like humans did millions of years ago.

“It brings us closer to animals,” she told National Geographic, “and helps us realize it’s all connected.”

More on tool usage: Cambridge Scientists: We Shouldn’t Define Intelligence According to Humanity